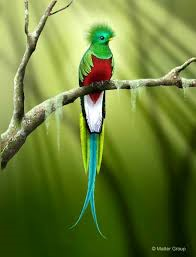 A Mayan Tale Retold
Long ago in the mountains and rain forests of Guatemala, there was a powerful Quiche leader named Cacique. He longed for a son to succeed him and after many years Cacique’s wife bore him a baby boy named Quetzal, which means ‘beautiful’.
The day he was born, a wise man placed a jade and obsidian necklace over his head and proclaimed,
“Your destiny has been decided, Quetzal. You will live forever.”
Everybody in the tribe cheered at these words except one warrior, Chiruma the jealous younger brother of the chief. He had hoped that Cacique and his wife would never have a son so that he could become the next leader. The only way that could happen now would be if Chiruma could get rid of his nephew, Quetzal.
As the boy grew up the uncle secretly tried to kill his nephew by several ways on many occasions but each time mysteriously failed.
When Quetzal became old enough to be a Quiche warrior there was a ceremony. Musicians blew ocarinas, beat slit drums and strummed charangos made from armadillo shells. Dancers with painted bodies writhed like snakes and whooped like spider monkeys.
At the feast Chiruma scowled from the shadows as the tribe gorged on dog, guinea pig and iguana meat. He refused the avocados, the pineapples and the sweet potatoes offered to him by slaves, but he did smoke the tobacco pipe and drink the hot chocolate spiced with chillies.
After the celebration, all the warriors had to go to battle against a neighbouring tribe. They took their bows and arrows, clubs and shields. Many of the Quiche warriors were killed but Chiruma noticed that arrows fired straight at his nephew always veered past without so much as scratching him. It was as if he had some magical protection. Then Chiruma realised that it must be the necklace given to Quetzal many years ago by the wise man.
Quetzal returned from the battle triumphant. He had fought furiously and killed twenty men.
The next night, while the chief’s son was sleeping, Chiruma snuck into his room, stole the necklace and wore it himself. The following day when Quetzal was walking in the forest, Chiruma surprised him from behind a tree and shot his nephew straight through the heart with an arrow. Quetzal fell to the ground. Chiruma would now be chief when his brother died.
He was about to walk away when Quetzal’s chest began to throb. Suddenly a bird emerged from out of his body and flew up onto a branch of a ceiba tree. This was no ordinary bird. It was the size of a parakeet with shimmering emerald wing feathers, a small yellow beak and a three foot tail with iridescent blue feathers. And as it sang it had the most beautiful voice of any bird before or since.
Suddenly it flew down towards the murderer and took the necklace up into the tree.
As Chiruma looked in astonishment at the resplendent bird above, a jaguar leapt upon him killing him with one bite.
Years later, in the year 1524, the Spaniard, Pedro de Alvarado marched with his army into Guatemala. He did not look in awe and wonder at the Mayan pyramids built without using iron or the wheel. He was not impressed by the written language in books and on stone, the mathematical skills or astronomical knowledge of the Mayans. He wanted to plunder their gold and destroy their gods.
Arriving in the highland city of Quetzaltenango, Alvarado’s conquistadors wearing metal helmets and shining armour attacked the natives with guns and knives. The Mayans fought back with clubs and spears and wicker shields. Flying back and forth above the battle was a quetzal, the guardian bird of Tecun Uman ,the Maya chief.
At the height of the battle the red headed Alvarado charged on horseback towards Tecun Uman.
The warrior hurled his club hitting the Spaniard on the head but Alvarado’s lance pierced through the chief’s chest and he fell to the ground.
As the fighting continued the quetzal bird flew down and rested on Tecun’s wound to comfort the chief in his final moments. There was nothing else the bird could do. When the great leader died, the quetzal flew off, his chest crimson with the blood of the fallen warrior.
From that moment on, all male quetzals have their breast feathers the colour of blood.
Nowadays, the quetzal bird is Guatemala’s national symbol. It’s on the flag and is the name of the country’s currency. Artists weave quetzal patterns into their Guatemalan cloth.
The quetzal symbolizes that just as the evil Chiruma could not destroy his nephew, nor will the spirit of the Maya ever be destroyed.

The Legend Of The Quetzal Bird