Another story right under my nose.

So there we are, Blas and I, halfway through the DreamOn Productions Mexican Tour 2018 when we realise we’re staying a hop, skip and a jump from where Jack Kerouac, William Burroughs and Allen Ginsberg hung out in the 1950s.

Kerouac spent much time mooching in this plaza and Burroughs lived for a while in one of the apartments below.

William Burroughs was no William Tell.

In an apartment at Monterrey 122 on the corner of Chihuahua Street, Burroughs killed his wife in 1951. He told her to put a whiskey glass on her head and instead of hitting the target he shot her through the forehead. By hook and by crook he received a suspended sentence. I am stupefied that Burrough’s got away with this and that so few people then and now condemn this act 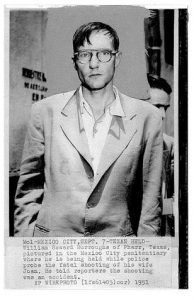 The beats go mad in Mexico