Not last year but the year after that, there was a man who moved into the old cottage on the edge of the village. He had lived in the city all his life and liked hustle and bustle and things to do.

In the countryside time tick-tocks slowly but the man knew how to keep himself busy. One day he moved his bed from one side of the room to the other. On another, he swapped the front door with the back door. He took off the old roof and put on a new roof. He knocked down walls to make the rooms bigger and then built new walls to make the rooms smaller.

One afternoon he looked out of the window. His eyes followed the path to the bottom of the garden which led to something he didn’t like the look of. Beside the old oak tree in the corner, there was a row of straggly trees and scruffy bushes cluttering up the place and making it look untidy. What on earth was it?

Most of the creatures living in the higgledy-piggledy hedge were hiding by the time the man arrived. Only the flutterbys and bumbly bees flitted and buzzed about the purple and pink, the blue and the red, the yellow and white flowers swaying in the summer breeze. But the man didn’t notice any of these, nor did he see the ladybird lazing on a leaf beneath his nose.

‘A higgledy-piggledy hedge at the bottom of my garden? This won’t do at all,’ he said out loud. ‘What’s needed here is a nice new fence. A wall of wood, all stiff and straight and neat and tidy. That’s what I want to see.’

The man went indoors to look at pictures of axes, saws and shredders in glossy catalogues. A big bonfire was something to look forward to. He imagined the blazing flames and the billowing smoke as the hedge crackled and burned. The thought of the smell of the smoke made him want a bacon sandwich and so he fried up some rashers and squashed them between two chunks of bread for his supper.

‘What!’ growled the old oak tree. ‘A nice new fence instead of a higgledy-piggledy hedge? You can’t live on a wall of wood all stiff and straight and neat and tidy!’

‘No, we can’t,’ pipped the ladybird, ‘the higgledy-piggledy hedge is our home.’

‘ No, we can’t,’ spluttered the flutterbys, ‘the higgledy-piggledy hedge keeps us warm in winter.’

‘No, we can’t,’ tweeted the wren, ‘the higgledy-piggledy hedge is where I lay my eggs in spring.’

‘No, we can’t,’ squeaked the dormouse, ‘the higgledy-piggledy hedge keeps me cool in the summer.’

‘No, we can’t,’ hissed the slow worm, ‘I like to snuggle in autumn’s fallen leaves.’

‘No, we can’t,’ barked the hedgehog, ‘without the higgledy-piggledy hedge I’m just a hog.’

‘No, we can’t,’ chirped the robin. ‘It’s our larder where all the nuts and berries grow. How would he like to live on a nice new fence?’

‘No, you can’t,’ growled the old oak tree, ‘a wall of wood, all stiff and straight and neat and tidy? That won’t do at all. You can’t live on a nice new fence!’

Sleep did not come easily for the man that night. Branches groaned and leaves rustled outside in the dark. It sounded as if the old oak tree was walking towards the house.

‘Don’t be silly,’ he thought. But still, he pulled the covers over his head until at last, in the early hours of the morning, he drifted off.

But there was no rest in his dreams either. When he’d fallen asleep his bed had been soft and cosy, but now it felt hard and rough. He turned over and saw that his bed had changed into a wall of wood. He rubbed his eyes and saw that it was exactly what he wanted to build at the bottom of the garden. It was his nice new fence. A wall of wood, all stiff and straight and neat and tidy. And he was on top of it!

OOPS! Not for long.

He fell off with a BUMP!

He climbed back up and tried to lie down on it again. But the top was so narrow he rolled over and fell off onto the other side.

Oh, but he was so tired. He leaned against the fence and closed his eyes, but after a while that made his feet ache and his head dizzy.

He scrambled up the nice new fence again and tried to sleep with his body dangling down on either side, but this made his tummy sore.

Then he straddled it as if it was a skinny horse, but a cold wind blew from one side and hot air blasted from the other. Half of him was frozen and half of him was scorched.

The fence stretched ahead and behind him into the distance. ‘Longer than the Great Wall of China,’ he thought. And it was a dull brown colour. ‘It’s not very interesting,’ he sighed.

As if that wasn’t bad enough, there was nothing else to look at. No animals, no birds, no flowers, no trees. Just him and the nice new fence. Nothing to do but pull splinters out of his bottom.

And what was there to eat? He leant down and chomped a chunk out of one of the many millions of dull brown planks. It didn’t taste too bad but the idea of eating wood for the rest of his life turned his tongue to sandpaper.

He was beginning to wish he’d never had the idea of putting up a nice new fence at the bottom of the garden when the fence began to wiggle like a giant worm. He held on tightly as it wriggled like an eel. Then it squiggled like a snake and began to bounce up and down like a bucking bronco.

he landed with a

on his bedroom floor.

The man picked himself up and drew back the curtains.

The sun was shining on the old oak tree. The birds were singing, and rabbits were scampering to and fro. Flutterbys and bumbly bees flitted and buzzed about the purple and pink, the blue and the red, the yellow and white flowers swaying in the summer breeze. A ladybird leapt from a leaf and flew off into the field beyond.

‘A nice new fence might not be such a good idea after all,’ thought the man, ‘but that higgledy-piggledy hedge at the bottom of the garden could do with a trim and a tuck to tidy it up a bit. Perhaps the farmer across the lane will show me how to do it?’ 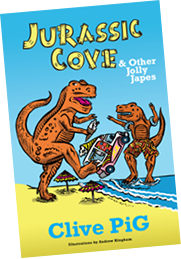 Visit  https://worldstorytellingcafe.com/clive-pig/   to learn more about Clive and make a donation in appreciation of his creations