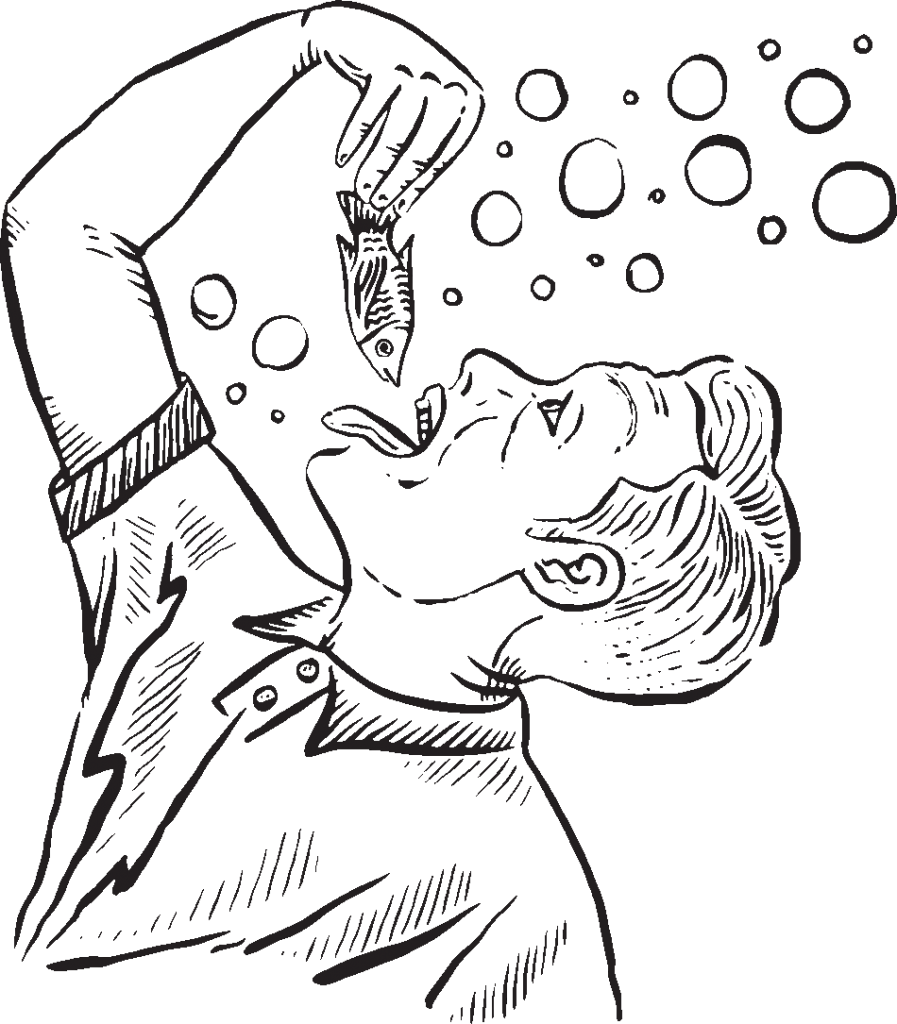 Anton often wondered how long the goldfish would survive if he swallowed it.

He wasn’t squeamish about such matters as he was the sort of boy who could scoff fifty Brussels sprouts – raw. He’d won the school’s prune eating competition twice. And once he’d downed a litre of Anastasia’s Apocalyptic Concoction without being sick for almost half an hour.

Besides, he’d be doing the little creature a favour. It would have much more fun swimming in his tummy for a while rather than around and around a big glass bubble forever.

He wasn’t worried about his parents finding out. They were too busy to notice such trifling matters. His sister would be the problem as she was quite attached to it. But he could deal with her.

Anyway, if the goldfish didn’t die he could always fish it out later and put it back in the bowl. That would confuse Clarissa.

Carefully he lowered the small green net into the water and scooped the goldfish out. It wriggled and splashed water on to the table.

For a few split seconds he watched the glittering creature gasping for life and then he lifted it to his face, opened his mouth and slapped the back of the net so that the flickering fish shot onto his tongue and slid down his throat like a kid on a water chute.

Wheeee! Down it shot into his stomach.

It tickled a bit but not much. It was only a little fish. Nothing to make a fuss about. It wasn’t the size of that salmon he’d seen in the river last autumn. He wouldn’t have been able to swallow that in one go.

Hurriedly he wiped the table, then dried the net on a tea towel and put it away in the drawer.

The bowl seemed lonely now that nothing was moving around inside. He thought about emptying it and then putting it on his head and being an astronaut for the rest of the afternoon.

Still, as it was, he had enough to occupy him. He wondered if the goldfish might glow in the dark. Then he thought that he should have probably swallowed a tropical fish as it might be too warm inside his tummy for a cold water fish. If only the goldfish could contact him to give him a clue about what was going on.

Anton was beginning to realise he hadn’t planned this experiment properly.

Suddenly his insides began to throb. He held his stomach and it was moving like when Clarissa was in Mum’s tum.

Then it all went still.

Anton had forgotten all about the baby grass snake he’d swallowed last summer.

The idea of a reptile growing inside him turned his stomach. He rushed into the garden and picked up a frog from the pond. Dangling it upside down at arm’s length, he opened his mouth and waited for the snake to rise to the bait.

An hour later he felt the grass snake stirring in his belly and glide up his throat until its head was looking out of his mouth. Its tongue flickered and then it shot forward and swallowed the frog whole.

Anton quickly snapped his mouth shut and bit off the end of the snake’s tail. He spat it out as the wounded snake dropped to the lawn and slithered off into the compost heap.

After wiping his mouth he looked at his watch and seeing it was only 3 o’clock found himself at a loose end. But then Anton remembered the goldfish bowl and wondered whether it would fit easily or would he have to rub some butter on it to slip it over his head?

Anton went back into the house to find out.