The first day of the summer holidays was as bright and full of endless possibilities as were Oscar and George. These two bestest of friends whooped in delight as they bundled into the back of the car and played I Spy all the way to the beach.

The sky was as blue as Oscar’s eyes and the seaweed as green as George’s face last July when he rode the roller coaster after eating a Knickerbocker Glory.

They plonked bags and towels on the dry sand by the rocks and stood gobbling bananas, eyeballing the cove.

Their mums had something terribly, terribly important to talk about which suited the boys just fine. They snuck off to the cliff, ignored the danger signs and disappeared into the narrow slit of a cave.

Oscar cursed like a pirate. George laughed like an ogre. Rowdy echoes bounced back promising a proper cave. Torch beams picked out a dead cormorant, a buckled fishing rod and dozens of plastic bottles. They didn’t know what they were looking for but would know when they found it.

As the walls widened, George pushed by, eager to be the first to find some seaside swag. Oscar reached down and picked up a stone with a hole in it and shoved it in his pocket. George found a decent piece of amber but then groaned. The cave had ended. They’d have to go back.

George always gave up first. Oscar would show him. He grabbed a dinosaur bone, thrust one end under an armpit and hopped about like a one-legged sea dog singing a sea shanty. Not to be outdone, George became the Dorset Ooser* dancing manically as Oscar flicked his torch off and on in the darkness.

After tiring of this they were about to head back when they heard mumblings and mutterings coming from behind the far wall. 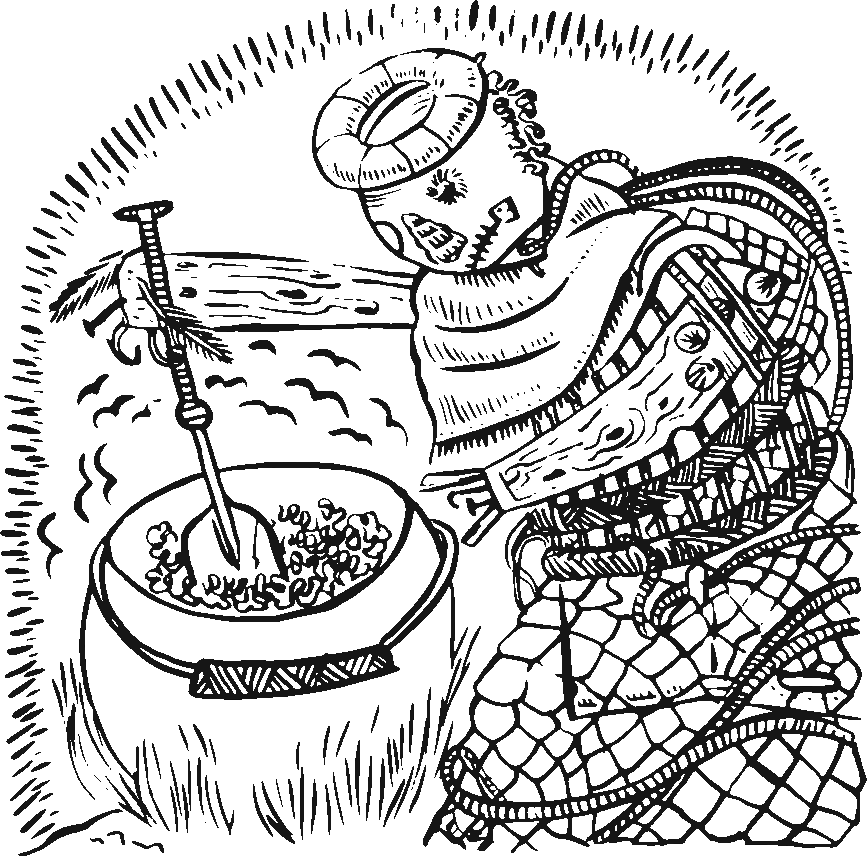 Pretending to be a miner digging for minerals, Oscar hacked at the rock face with his bone. As soon as the bone touched the wall he felt a shock, he saw a flash and the wall collapsed. When the dust settled the friends spied a strange old woman huddled over a steaming cauldron in a green, glowing grotto.

She was a jumble of flotsam and jetsam. Her head was a marker buoy crowned with an inflatable rubber ring. A peeling eyepatch made of car tyre was half stuck on her orange face and her one good eye seemed to be a sea anemone. Water dripped from her whelk-shell nose into her pouty fishy mouth and then dribbled into a tuft of seaweed stuck on her chin. She wore a shawl of sail cloth with sandflies hopping about her shoulders.

Her arms and legs were pieces of driftwood dotted with barnacles poking out of a lobster pot. Her fingers and toes were fishhooks and feathers. A tangle of nylon fishing net entwined with blue rope seemed to hold the whole kit and caboodle together.

Stirring the cauldron with a dinghy paddle, she spoke with a voice that sounded like the creaking timbers of a galleon.

A dino’s bone for my brew.

Is that one there?

She snatched it out of Oscar’s hand and chucked it into the cauldron.

The two boys stared at the curious creature and then at the green steam rising from the bubbling concoction. The sea witch tasted the broth then spat it back into the pot through her teeth of rusty rivets. She cracked a seagull’s egg on the side of the pot, stirred it in and finally scooped up a handful of sand to thicken the soup. The hag then plunged a drowned sailor’s skull into the brew and offered it to the boys.

Oscar looked at George, George looked at Oscar: ‘Me first!’ each cried. 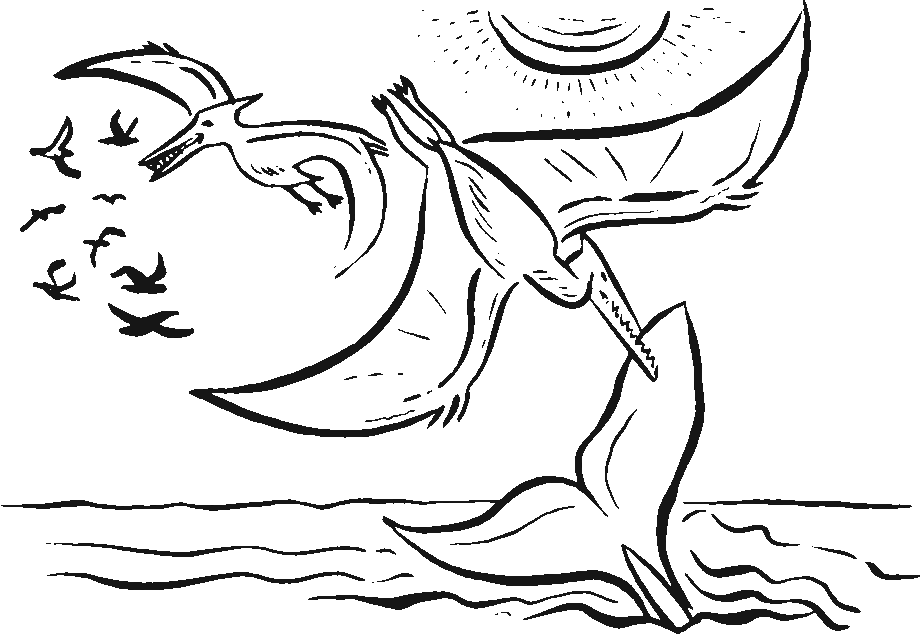 The next they knew they were flying side by side in the cloudless sky. Their mothers, oblivious to what was going on above their heads were still having their terribly, terribly important conversation.

For the next sixty minutes a pair of pterodactyls shocked and thrilled holiday makers and locals alike.

To rapturous applause the flying reptiles terrorised the ice cream-snaffling, chip-splattering seagulls, clearing the startled scavengers from the cove. Then, to the delight of the crowd below, they performed an aerial display much more daring than the Red Arrows before dive-bombing a great white shark lurking in the bay about to sink its teeth into the pink and yellow lilo on which lay the well loved local celebrity, Penelope Picklemonger.

As the shark skulked away, the pterodactyls rose up into the heavens with cheers ringing in their ears. They were about to set off on a race around the planet when without warning each wingbeat became slower and their bodies heavier and heavier.

Instead of speeding up, the two friends began to falter.

Sadly, their aerial antics were over. With their powers waning, it was all they could do to steady their nerves and steer a course to glide safely back into the cave in the cove.

They tumbled into the cavern and begged the sea hag for more of the magical salty brew. She stared at George with her one anemone eye and spoke with a voice that sounded like heavy waves crashing against a cliff on a stormy night.

Give me a gander at your amber.’

As soon as George showed it to her, the sea hag snatched it and tossed it into the pot. A second later the boys drank greedily from the skull. 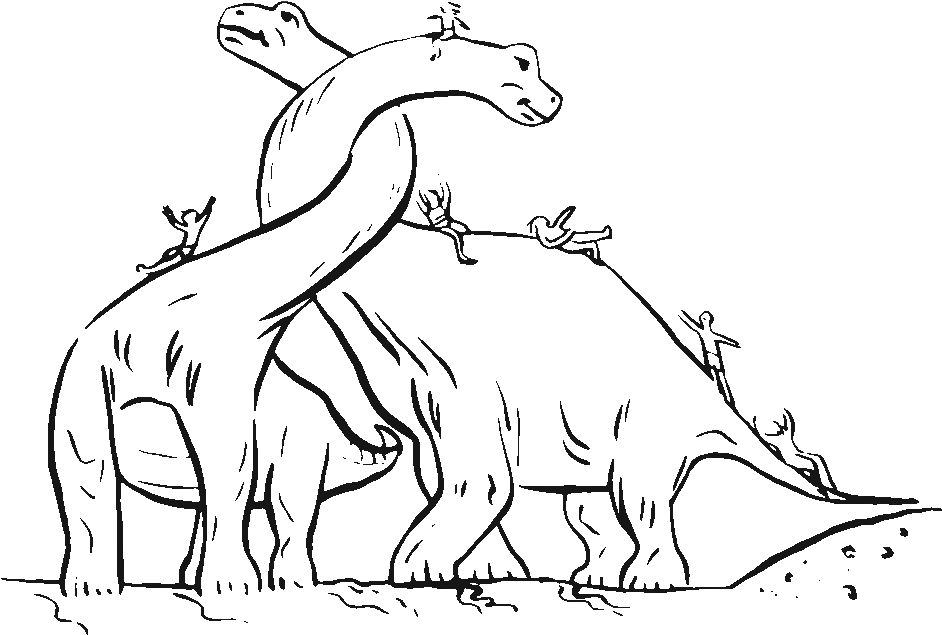 They emerged from the cave and plodded past their mums who were still having their terribly, terribly important conversation. All the others on the beach watched in stilled silence as a couple of dark grey dinosaurs lumbered towards the sea. Those close by hurriedly moved their beach paraphernalia out of the way but nothing could be done to save their sandcastles.

Once Oscar and George were buoyant out in the bay the dinosaur duo bowed their long necks and with booming bellows beckoned to all and sundry to climb aboard.

Hundreds of people hollered with joy and splashed into the sea.

The two friends entwined their necks to make a giant helter skelter. After three goes each, everyone climbed aboard and had a fabulous tour around the bay.

But once again, almost an hour later, the magic began to wear off. It was all the pair could do to get their passengers safely to the shore. Lobsters and crabs dropped from their dripping, ailing hulks onto the sand. As the brontosauruses, each heavy as an oil rig, trudged wearily towards the cave, the smell of barbecued seafood wafted into their frisbee-sized nostrils.

Stumbling into the cavern they begged the sea hag for more of the magical salty brew. A hermit crab scuttled around her neck and disappeared behind a cuttlefish ear. She stared at Oscar with her anemone eye and roared like the Kraken,

A special stone should do the trick,

It’s in your pocket,

Oscar dug into his pocket then plopped the stone with a hole into the pot. Seconds later, the pals drank keenly from the skull. 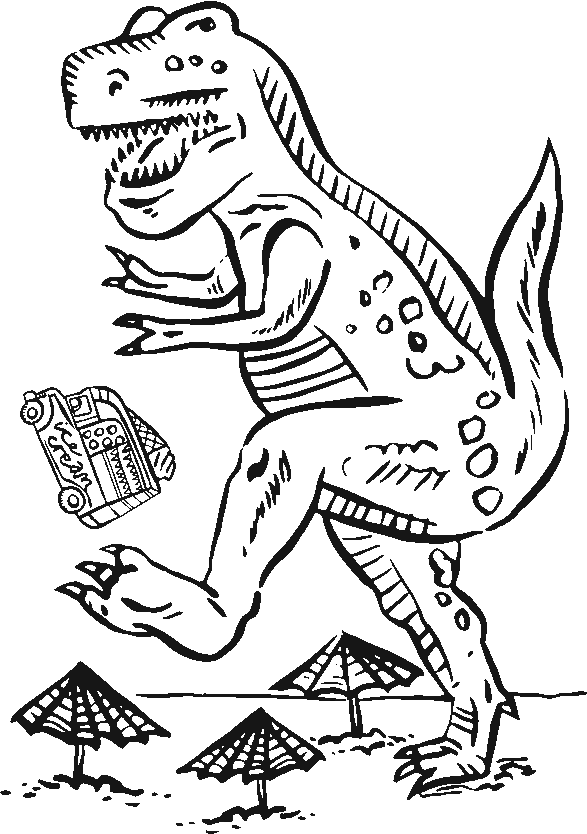 It had already been a very special day for most of the people at Jurassic Cove. After all, it’s not every day that you see a pterodactyl or a brontosaurus, let alone a pair of each. But many later agreed that the highlight had been watching a couple of Tyrannosaurus Rexes playing beach football with an ice cream van. Years later when grown men and women recounted being given a piggyback by a dinosaur, listeners would shake their heads in wonder. Children would remember forever and ever the day they played in a life-size sandcastle made by two of the friendliest T.Rexes you’d ever hope to meet.

Unfortunately, all of this excitement was missed by two mothers on the beach who’d been having their terribly, terribly important conversation right up until mid-afternoon when they realised they hadn’t seen their sons for the best part of the day.

Suddenly they jumped up and looked around. One ran to the sea, one ran to the cliff. They called out the boys’ names. They dashed back in panic about to ring emergency services when a woman lying on a towel nearby said,

‘Don’t worry dears. They’ve been having a wonderful time rushing in and out of that cave. Such lively imaginations. I wish my boys were like that. I can’t get mine off their phones.’

At that moment, Oscar and George appeared and cried,

‘Can we have our picnic now? We’re starving!’

This story is from Jurassic Cove & Other Jolly Japes – read more stories and poems, or buy the books.