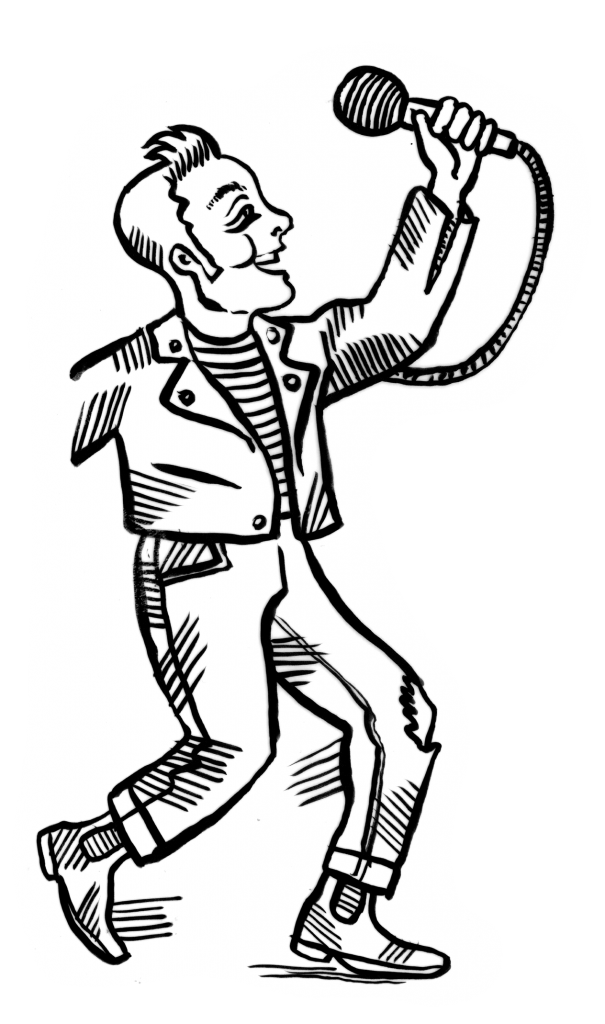 But the truth was, he wouldn’t eat anything unless it had chocolate sauce squeezed on it or chocolate sprinkled over it.
Luckily, his mother couldn’t stand the stuff, which was good news for Colin as that meant there was all the more for him. Often she’d warn him that one day he’d turn into a Chocolate Kid. He’d reply that he didn’t care if he did.

Now one night, after a double hot chocolate with three chocolate flakes, Colin tossed and turned in bed. He just couldn’t get to sleep. Do you think he’d had too much chocolate? I think you might be right.

He started counting sheep jumping over a fence. And yes, you’ve guessed, the fence was made of chocolate and so were the sheep! One, two, three, over they went. But then, Colin noticed that a chocolate gate was open and the chocolate sheep had run out of the chocolate field and were escaping down the chocolate lane.

It was all too much for Colin. He couldn’t help himself. He climbed over the chocolate railings and then dived headfirst into the quagmire of soft, milky-brown chocolate.

He swallowed the warm liquid as he swam deeper and deeper. When he reached the bottom of the chocolate sea he lay on his back with his belly full. Colin was in chocolate heaven.

And then he woke up.

‘What a wonderful dream,’ he thought.

As Colin was getting out of bed he noticed a strand of dark brown hair on his pillow. This was curious as the colour of his hair was blond. He picked it up and it felt strange. Not soft and light as air, but hard and brittle, and then it broke. Snapped in two. That was odd. Even more curious was the smell. It smelled of … chocolate?

He bit off his thumbs and then ate his fingers one by one. He was about to gobble what was left of his right hand when he realised that his feet, his legs, his arms, his tummy, his head, his whole body was made of the most delicious food in the universe.

Just as his mother has warned him. He’d turned into a Chocolate Kid. 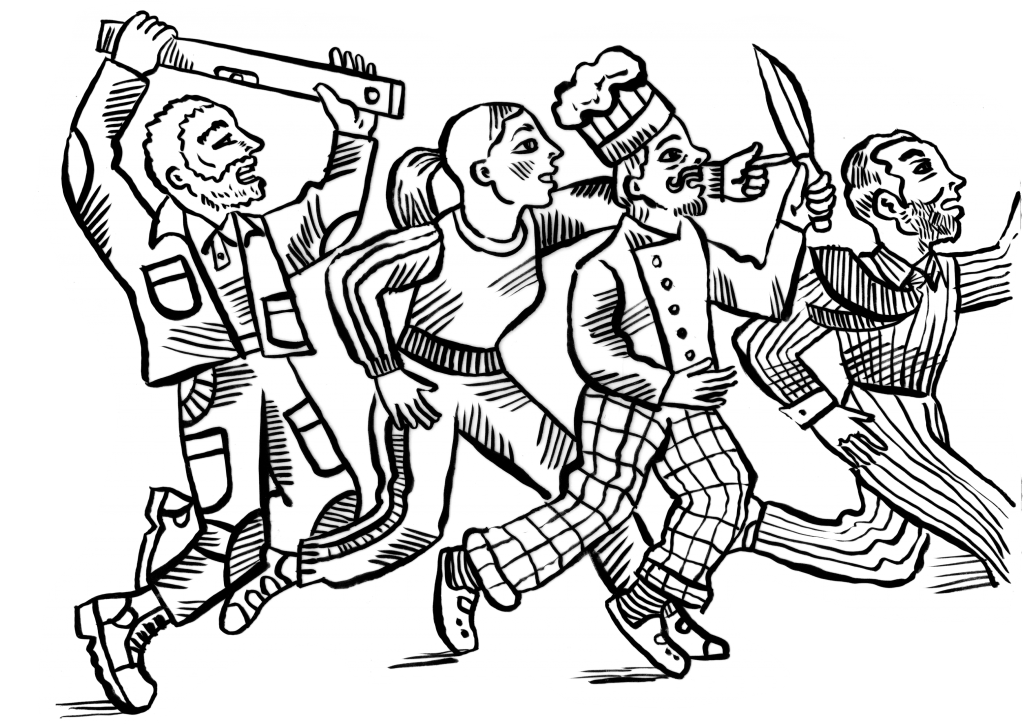 But then something in his chocolate skull – perhaps his brain was only half chocolatised – made him realise that if he carried on like this there wouldn’t be much of him left by lunchtime.

He called out, ‘Mum, come quick, I think I’m going to eat myself!’

But there was no answer. His mother had just popped out to the shops.

He panicked, rushing down the stairs, out of the house and into the street.

On the corner by the newsagents he saw his two chums, Connor and Courtney. He called to them, ‘Help me, I’ve turned into a Chocolate Kid. I can’t resist it. Stop me, I think I’m going to eat myself.’

They came up to him, pulled off his ears and laughed, ‘Not if we eat you first!’

‘Ow!’ squealed Colin, before shooting off down the road pursued by his so-called friends.

A bird flew from a tree and pecked off his nose. A dog chased him and bit off Colin’s left foot.

Wherever he went someone or something wanted a piece of him. Even the pavement seemed to relish the trail of chocolate Colin left behind him.

Soon a crowd of people including aunts and uncles, policemen and teachers, shopkeepers and traffic wardens, footballers, pop stars and children were chasing Colin through the streets, parks and shops of the town.

Anyone who loved chocolate joined the chase. Even you would have joined in if you’d had the chance. But you weren’t there, so bad luck!

Poor Colin, by the end of the day there wasn’t that much of him left to eat. What did remain lay under a hedge out of the sun and hidden from his pursuers.

As night fell, what looked like a battered bowling ball rolled and bumped 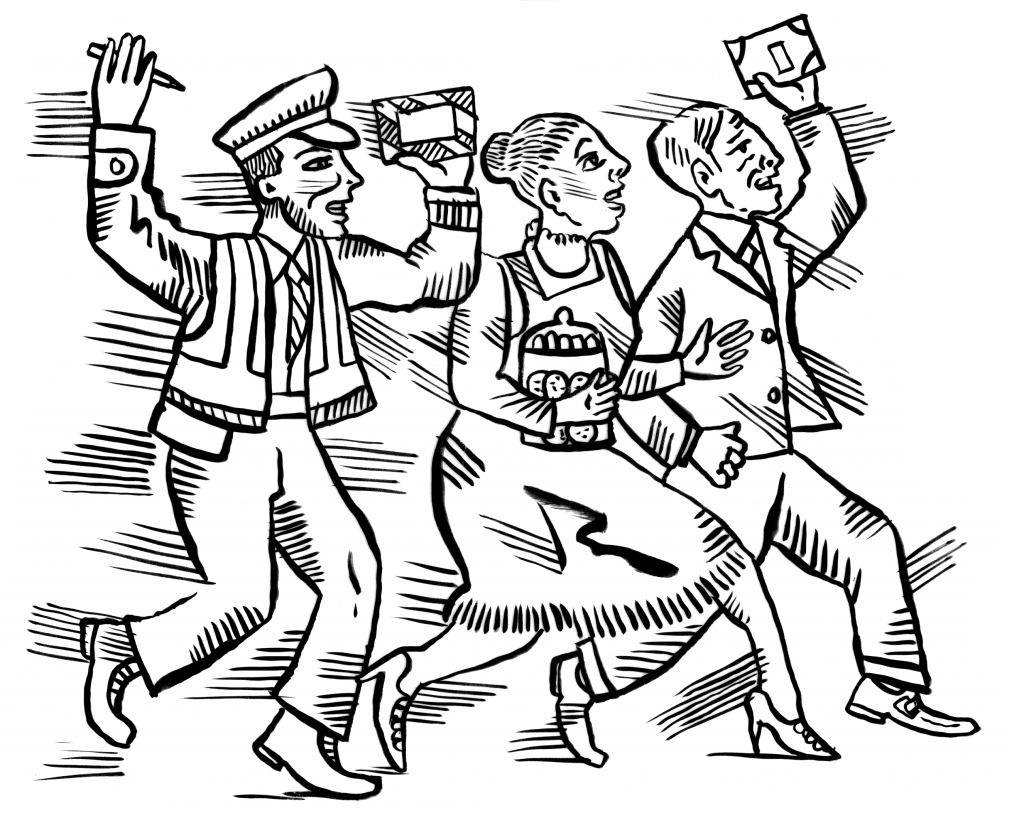 along the sidewalk. It turned into Colin’s front garden, jumped through the cat flap and bounced up the stairs into Colin’s bed.

At last, lying on his pillow, Colin felt safe.

Just then, Colin’s mother came into the bedroom.

‘Hello Colin, I thought I heard you come in. Oh dear, you have been in the wars haven’t you? Don’t say I didn’t warn you something like this might happen if you carried on with your chocolate fixation. Never mind. We’ll soon have you as right as rain again.’

She went downstairs and soon returned with a large steaming bowl of chocolate soup. She spooned some into Colin’s mouth and both of his ears grew back. With each mouthful, parts of his body returned. Soon the bowl was empty and Colin was almost back to normal. But unfortunately, when he lifted up his hands there were still some parts missing.

‘Don’t worry, Colin. I’ve put aside a secret supply of chocolate biscuits. I think I’ve got just the right sort to finish the job properly.’

When she returned this time, she did indeed have the right kind of biscuits. Each time she popped a biscuit into his mouth, another little part of his body appeared.

And yes, of course, you’ve guessed correctly. The biscuits were not chocolate digestives or bourbons, they were chocolate fingers, but unluckily for Colin, there were only nine left (because he had previously discovered his mother’s secret hidey-hole).

But even more unfortunately for Colin, tomorrow was Monday and it was the first day back at school after the summer holidays. And if that wasn’t bad enough, Colin was still made of chocolate!

Do you want to read more ticklish tales?

This story is from Unicorn in the Playground. Buy it here.