Day 1
Thrown in at the deep end with performances to invited schools at the Children’s Museum in Amman. Pupils had little English, I had no translator. But you know me – gestures and rhythm can supersede language any day of the week.
That evening ran teacher training course on my Top Ten Tale Telling Tips.

Day 2
More teacher training at a couple of state schools on outskirts of Amman – one for boys and one for girls. Stark contrast between the two. Teachers in girls’ school enthusiastic and focused; those in boys’ school tired and demoralised.(Mind you, they had classes of fifty pupils on the site of a former Palestinian refugee camp).

Day 3
Za’atari Refugee Camp.
Minibus trip north along highway with road signs for Syria, Iraq and Saudi Arabia. Jordanian helicopters and fighter jets hovering and zooming above imperious camels in the rocky desert.
Six hundred thousand Syrian refugees live at Za’atari. Kidzmania and I entertained a couple of hundred of them. They amazed and astounded us.
These displaced children were such fun to be with. They were joyous and sparky and polite. An honour and a pleasure to be amongst them.

Day 4
Zaha Centre, Amman
Nick Bilbrough from Totnes and Clive PiG from Ashburton hear the tale of Tanbouri read to us by Areej from Amman from her mobile device as we drive to the colourful Zaha Centre for today’s shift. Tanbouri has a pair of shoes he wants to get rid of, but every time he throws them away they come back to haunt him. It’s a cracking story from the Arabian Nights and I’m going to add it to my repertoire.
Later in the day in the middle of The Singing Toad I ask a child what would be their first wish out of three … ” Free Palestine!” is the response.

Day 5
Turkish coffee and dates with the Principle at a military school for girls, followed by two shows and a teacher training session. Then the fun really begins. A marvellous magician appears in the playground and astounds us all.

Last show of week at Shoman Foundation. Big thanks to Joseph Field at British Council for booking me, to Areej who sorted the shenanigans and to Farah for her fab translations of my wordy ways. 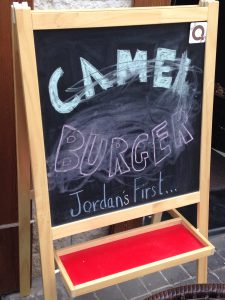