The Buzzard Man  –  an original tale from Dartmoor, UK, by Clive PiG

Call me a liar if you want to, though don’t expect me to believe you, but there was once a poor farmer’s wife who had a lazy old bag of bones for a husband. Every morning it was the same old story. While she was hustling and bustling around the farmyard, he’d be fast asleep in bed. His snores shook the house until the pots and pans toppled out of the cupboards and the pictures fell off the walls.

The only way to wake him was to empty a bucket of water over his head. Then the wife would stuff him into his clothes and kick him down the stairs. It was all he could do to gobble down his porridge before he was shoved out of the door to tumble head over heels down the garden path. When he came to a stop, he’d look around at all the work needing to be done on the farm. He’d sigh and shrug his shoulders, lie down by the rhubarb patch and go to sleep until suppertime.

The cows were never milked or the eggs collected, the seeds were never sown or the crops harvested, unless it was by the poor old wife. The husband only lifted a finger to pick his nose or to scratch his bum. That was how it had been for years. But from today, things would be very different around the farm.

The day started very strangely indeed. The wife milked the chickens and collected the eggs from the cows. She was in such a tizzy that when she came into the house she pushed the husband out of the door with a sharper shove than ever. By the time he’d tumbled to a stop he was so battered and bruised he couldn’t lie down. It was then he looked up and saw a large buzzard circling above.

The husband shouted up to it,

“ Lucky you, drifting about in the airy-fairy sky up there! You don’t know what it’s like to be a human, tramping on the hard earth and having a scold for a wife. It’s a simple life being a bird. All you do is flap your wings about a bit, then glide around taking it easy. You should come down here and find out what it’s like to be a man who walks until his legs don’t work and toils until his arms drop off.”

Well, with that, the buzzard swooped down, perched on the fence post next to him and said,

“How are we going to do that?” asked the man, scratching his head.

“Easy,” replied the buzzard, “you give me your clothes, then you can have my feathers.”

And so, the man became a buzzard and the buzzard became a man.

“How do I find my food?” asked the buzzard who had been a man.

“Oh, it’s easy,” said the man who had been a buzzard. “When you’re up in the sky looking down from on high, you’ll be able to see the scent of a dead creature rising from its carcass. Buzzards can see much better than humans. To their eyes, the smell rises like a kind of smoke. If it’s a small creature, like a dead mouse, the smoke seems pink and wispy.”

“I don’t like mice,” said the buzzard who had been a man.

“If it’s a dead rabbit, the smoke is grey and light.”

“I don’t mind rabbit,” he replied.

“If it’s a dead deer, the smoke is black and strong.”

He gave her a big hug and told the wife to sit down while he made her a cup of tea. Well, you can imagine, she nearly dropped dead with shock at that, and then she had to pick herself up off the floor after he told her he was going to be busy for the rest of the day.

He tidied up the farmyard and the vegetable garden, putting all the brambles and rubbish into a big heap. Then he called to the wife to show her all the work he had done. She watched as he struck a match and set fire to the pile. As the bonfire blazed, a great spiral of black smoke rose up.

Suddenly, a buzzard swooped down through the smoke, plunged into the fire and was burnt to a cinder.

The wife gasped, “Did you see that big bird drop into the bonfire? What was it thinking of?”

“What a birdbrain,” said the man who had been a buzzard.  “You go indoors and put your feet up while I finish off here.”

A few weeks later, when the wife went to the market, a neighbour came up to her and said:

“What’s got into your husband? Everybody’s talking about him. He’s changed.”

“What do you mean?” enquired the wife.

“Well, he’s become hardworking and very polite to everyone nowadays it’s true, but …”

“But what?” asked the wife.

“Haven’t you noticed?” said her neighbour. “When he thinks no-one’s watching, he starts rubbing his shoulders with his nose as if he’s preening himself. And what about those little feathers stuck to his clothes?

And what about his nose? It’s not the same one he had before. Now it’s hooked and beaky. And he’s got a strange smell to him. How can you put up with it?

I was walking past your place the other day and I saw him trying to balance on a fence post. Last night, my Tom saw him up on your roof by the chimney pot making strange noises and flapping his arms about as if he was trying to fly!

People are talking. They say he’s not the man he was. He’s acting like a bird. He’s not a proper human. They say your husband is a Buzzard Man!”

“You hold your tongue,” said the wife. “I’d rather have someone who works hard and cares for me, than live with that lazy old bag of bones I had before. I don’t care if he is a Buzzard Man. I like him just the way he is.”

And with that she stomped away to buy a couple of rabbits from the butcher’s stall. She put them in her basket and made her way back home to prepare the supper.

That evening they sat at the kitchen table enjoying their meal. Her stew was delicious – rabbit braised in red wine with apricots and shallots. But her husband didn’t like fussy food. He ate his meat red and raw, tearing it apart with his bare hands and washed down with a mug of dirty water.

And as far as I know, unless you can tell me otherwise, they both lived very happily ever after.

And if you believe that story, I hope you live happily ever after.

And if you don’t believe that story, I hope you live happily ever after.

If you have enjoyed this story, please visit the World Storytelling Café   [https://worldstorytellingcafe.com/clive-pig/]

where you will see a full 45-minute set from me as well as performances from other fabulous tellers.

The site operates on a pay-what-you-can-afford basis. Storytelling is my livelihood, if you can afford to make a donation (via the button) it would be very much appreciated, if you can’t I understand, please listen and enjoy!

The Buzzard Man is featured in Unicorn in the Playground 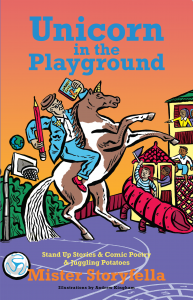